Rfm: The FileMaker API for Ruby

This page is also available in Japanese (courtesy of www.famlog.jp)

Rfm brings your FileMaker data to Ruby with elegance and speed. Now your Ruby scripts and Rails applications can talk directly to your FileMaker server with a syntax that just feels right.

A Better Way to Code

We’re huge Ruby fans, and it shows in the design of Rfm. It seamlessly merges FileMaker concepts and Ruby idioms so things just work the way you’d expect. Click Why Ruby? above for a few shining examples.

There are a lot of reasons to use Ruby. Many people swear it’s the easiest, prettiest, and most expressive language around. And because Rfm is fully object oriented, it fits right into your existing Ruby code perfectly.

Let’s be honest. The biggest reason most people consider Ruby is because they want to use Ruby on Rails. Rails is a web framework that helps streamline the process of building web sites, web applications, and web services. Although it is a relative newcomer compared to web stalwarts like PHP, ASP, .NET, and JEE, Rails has become extremely popular. And the reason is simple: It makes building web sites easier. Now, with Rfm, this industry-leading web technology is available to FileMaker Pro users.

See the Examples section to download a real, fully functional web site built with Ruby on Rails and Rfm.

When people talk about Ruby, inevitably the word expressive comes out. What does this mean? Simple: in Ruby, you can express complex ideas easily, with simple code. Once you get the hang of it, you’ll be astonished how much you can accomplish without a lot of code.

Here’s a very simple example. Suppose you have a customer in mind, and you’d like to know how much he’s spent at your store. Here’s how you would find the total value of all orders in Ruby:

That may look a little complex at first, but once you know Ruby’s basics, it is really quite readable. In english, it says “On the layout called Order Layout, find every record with ‘1’ in the Customer ID field. Loop through each of them, and add each Total field to my variable.”

And now, the equivalent code in PHP:

The PHP code isn’t bad per se, it’s just more to remember, more to type, more to read through…more fuss. You could say it takes less work to express the same idea in Ruby.

Errors that make themselves known

Ruby’s expressiveness shows up when it comes time to tackle errors too. Inevitably things go wrong, and your code should probably handle common problems reasonably well. For example, what happens if there are no order records for the customer in the example above? In PHP, you’ll get an ugly error message on the page (something about objects and methods and types). To properly handle this error possibility, you need to revise your PHP code:

This version checks to make sure PHP didn’t run in to an error of some kind when executing the find action. How do you revise the Rfm example to handle the no-records-found problem? It already does. In Rfm, no records found isn’t an error. It just means you get an empty set of records back. Since Ruby is happy to loop through an empty array (it simply doesn’t enter the loop), your total will calculate without trouble. (If you want Rfm to raise an error when no records are found, you can tell it to. But usually you don’t want it to.)

Other problems could happen though. Maybe your Web Publishing Engine isn’t running, or the database is not open. If an error like this happens, Rfm raises an error in Ruby. This will instantly abort processing of the script and report an error on the web page or console. Since errors are automatically detected, you don’t have to check for them maniacally every step of the way through your code. If you need to detect an error and do something (like show a nice message), you can do it easily:

The rescue command in Ruby lets you plug in some code that automatically kicks in whenever an error is encountered in the block of code above it. This way you can be as fine grained or as nonchalant as you want to be, and still be confident a stray error won’t leave your script doing things it shouldn’t.

Unlike many other scripting languages, which have a little objectishness rolled in, Ruby is object oriented at its core. That’s why Rfm is able to provide an interface that feelslike real Ruby. For example, when you perform a find with Rfm, you get back a ResultSet object, which is essentially a group of records. Although FileMaker has some pretty specific capabilities this object needs to support (like field metadata, and portals), a ResultSet has a lot in common with a simple Ruby Array as well. Thanks to the power of object programming, a ResultSet is an Array. So if you’re familiar with Ruby (and you will be soon), Rfm result sets work just like you’d expect. You can loop through them, count them, combine them, and otherwise work with them just like any other array.

By contrast, with a non-object-oriented language like PHP, sets of records have to be handled in a special way since there’s no way to augment the built in array. That means you have to learn two ways to loop: one for arrays, and another for FileMaker records.

Rfm can be used for everything from highly interactive web sites to behind-the-scenes processing scripts. Here, you can see a few simple examples.

The best way to see Rfm in action is to check out the sample site. This simple web site was built in Ruby on Rails and Rfm. Best of all, you can download the complete source and run the sample site on your own computer (you need to install Rails first). It uses the Server Sample database that was automatically installed on your FileMaker Server, so you can just point it at your server and watch it work. 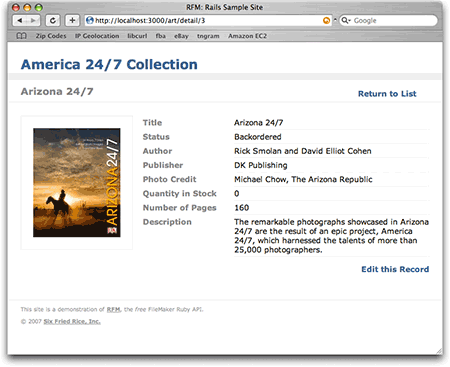 Other Examples and Documentation

The documentation included with Rfm is loaded with additional code samples to help you on your way. You can see the docs online right now.

To take advantage of Rfm in your own work, you need a few things. First, you need a supported version of FileMaker Server (see below). You also need Ruby, Rfm, and (optionally) Ruby on Rails. This page tells you everything you need to know to start producing gorgeous code.

Get a supported FileMaker Server product

Get Ruby, Rails, and Rfm

Installing Ruby, Rails, and Rfm is a breeze. Note: If you already use Ruby on Rails, skip straight to step 4.

The easiest way to get started with Rfm is to download the samples. This package includes a sample Ruby on Rails web site (you can see it live here) and an example Ruby script.

Read the docs and get the samples

Rfm includes comprehensive documentation, which you can get from your Gems documentation server, or from right here.

Still have questions? Hopefully they’re answered here, but if not, feel free to contact us.

Should I use Ruby on Rails for my FileMaker web publishing?

How much does Rfm cost?

Yes. Honestly. Rfm is licensed under an MIT license. This is an astonishingly open license. You can use it for free, and distribute it freely with your own creations. You can modify it, and build your own products around it. You can even make your own Rfm (with a different name) and release it as a competitor to Rfm. The only requirement is that the copyright notice from the License file be included someplace reasonable in anything you ship.

I’ve heard Ruby is slow. Will my site be a dog?

Honestly, Ruby is slower than some popular scripting languages, including PHP and Perl. Ruby’s focus is not raw speed. Rather, it’s all about developer productivity. This should be a familiar concept to anyone interested in Rfm: It’s just like FileMaker.

Even though there are faster database servers out there, none of them offers the ease of use and productivity of FileMaker Pro. FileMaker and Ruby both get it: For the vast majority of applications, speed is not the limiting factor. Database and HTTP overhead generally account for much more of your web response time than code processing, and Ruby executes plenty fast for all but the most extreme edge cases. Besides, compare the cost of a slightly faster server to the cost of software development. A happy, productive developer is worth a dozen cheap boxes.

How have I gone all my life without such an awesome web platform?

The world will never know.

Do I really need FileMaker Server? I don’t have a lot of users and I’d like to point my Ruby scripts at a copy of FileMaker Pro

No can do. Rfm uses FileMaker’s RESTful XML API, which is only available with FileMaker Server.

Is Rfm an ActiveRecord driver?

Nope. It’s a totally different beast, but it’s easy and elegant to use.

Rfm creator Geoff Coffey decided early on that wedging FileMaker into ActiveRecord would be a nuisance. Some of the reasons, in no particular order:

On the bright side, if you disagree with all of the above and think we’re flat out wrongyou’re free to use Rfm to help you build ActiveRecord support. If it works well, we might even roll it into Rfm proper some day.

When I try to start up my Rails web site, it complains about database configuration. Must I have an empty SQL database? I just want to use FileMaker.

When you’re using a SQL database, Rails uses the (awesome but FileMaker-uncompatible) ActiveRecord. It tries to connect to a SQL database whenever you launch a Rails app.

The solutions is simply to turn ActiveRecord off. Look in your environment.rb file for a section like this:

The config.frameworks setting lets you tell Rails which parts you don’t need. Just uncomment it and turn off ActiveRecord:

Your app will now start without complaint.

I think I’ve set everything up correctly, but I keep getting an “authentication error.” It says my FileMaker account name or password is wrong. What gives?

Switch to the Privilege Sets tab and open the privilege set your Rfm account is assigned to. In the bottom-left corner of the Edit Privilege Set window, turn on the “Access via XML Web Publishing” extended privilege. Dismiss all the open dialog boxes and try again.

Rfm should be much happier now.

What’s next for Rfm?

As an open source project, Rfm is open to input (and even code contributions) from all its users. We’re discussing future features all the time. Some ideas on the table: